Bridge of Birds Bridges the Pigeon-Holes

As ever, I have a both a Kindle book and an Audible book on the go. While Wolf Hall by Hilary Mantel occupies the “Now Playing” tab on my Audible app, I am around 40% of the way through Bridge of Birds by Barry Hughart on the Kindle.

The best way I can think to describe Bridge of Birds is as an Absurdist Comedy Serial Crime Caper set in an ancient China that ranks higher in historical authenticity than the Japan of Gilbert and Sullivan’s Mikado, but not by much. I could also say that it is hilarious, witty and marvellously entertaining, because it is.

It is regarded as a Fantasy book, although it is very different from the vast majority of books so categorised. Technically, it falls into the sub-genre of Chinoiserie. Or so Veronica Belmont claimed on the Sword & Laser podcast, after a fashion anyway. She had considerable difficulty pronouncing “Chinoiserie”. 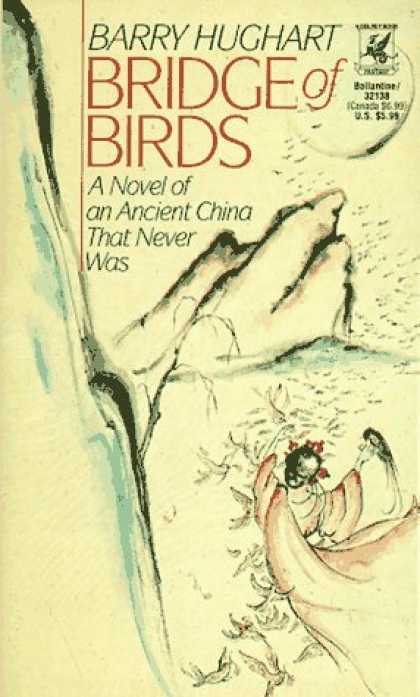 I had obtained Bridge of Birds on Kindle before I knew it had been chosen as a Sword & Laser book-pick, but brought forward my reading of it when I learned of its selection. I was only a few pages into The Guns of Avalon (Book #2 of the Chronicles of Amber by Roger Zelazny) but that book is now “on pause”. So far I seem to have taken to Bridge of Birds rather better than either Veronica or her co-host Tom Merritt, both of whom seem to be slow to warm to it. Surprising, that. Hughart’s book may be off-beat but I had taken Tom and Veronica to be sufficiently widely read that they would have been more instantly receptive to something as refreshing as Bridge of Birds even if it is hard to pigeon-hole.